It’s been a few days since I’ve written.  I’ve had a few emotions to get through.  I don’t know if it’s hormonal residuals or cycle induced extra, but whatever it is; it’s driving me crazy.  I read a infertility related post recently that said every failed infertility attempt was like getting through the grieving process all over again.  Maybe that’s it.  Maybe I’ve been grieving. 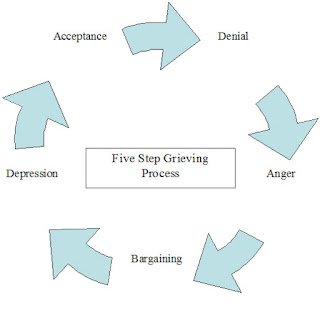 After I took the HPT for my first IUI and received the negative result, I already told myself that it wasn’t really negative.  It was just too soon.  I rationalize.  I convinced myself that I should have taken the test with morning urine and not afternoon.  I had a thousand excuses.  Then, I quickly went to anger…and on to bargaining..and then the depression.  I’ve managed to go full cycle with accepting that IUI#1 was a failure.  What I was not expecting was the wave of emotions that followed.

This past weekend, my family and I attended a work function.  It was a very nice event, well catered, well entertained, and very enjoyable.  When I walked in, I was introduced to a young woman who was very pregnant.  I felt giddy.  Seriously, I can’t explain that one.  I was so immensely happy for this woman whom I’d never met before.  She and her husband explained that they were having child number three.  I remember just feeling really excited for this family, and that was just odd for me because I am not one to randomly cheese (smile) and go haywire. Nor am I one to get extremely excited over strangers with burgeoning bellies.

Fast forward to today and my emotions were all over the place.  I woke up and didn’t want to go into the office.  I didn’t want to deal with anyone.  I just wanted to be left alone.  I knew my cycle was still on, but it was just about over (TMI).  So my hormones should not be this bad, but they are.  I got to work this morning to emails that just sent me in a sour mood.  I went to a meeting that I was not scheduled to attend where I was designated to complete a task I wasn’t scheduled to complete.

When I went home, I was well aware that my mood was not exactly the best.  I was frustrated and short-tempered…unintentionally so.  My son said “Mommy, you’re cranky.  You sound frustrated”.  That made me feel like the worst person in the world because I never want anyone in my family to feel like they are a bother or frustration to me, especially not my little ones.  Then S. called with a needed “favor” and I ended up needing to leave the house to run an errand when I was limited on time.  I finally got everything done I was trying to do and made it back to the house only to leave immediately thereafter for choir rehearsal.

It was when I got to choir rehearsal that things took a crazy turn.  While in the middle of rehearsing a song, in walked one of my girlfriends with her beautiful pregnant belly that had to have grown by leaps and bounds this week.  In she walked and the moment I saw her belly, tears started falling.  I mean lots of tears and sobs and I was a mess.  We were fortunately in a song of worship so I was able to stop and get myself together, but oh my goodness.  What in the world is going on?!

I don’t know if anyone else has experienced a crazy overboard of emotions after a medicated fertility cycle, but I have to admit, I’m not looking forward to what IVF #1 will bring if IUI#1 cooked this up.

Have a great night.

Imperfect Timing, but Blessed All The Same