Hi guys! I just wanted to drop a quick one to let you know how Miss A. is doing and how she did at her two month check-up. I went in a bit sad because I knew she would have to get shots and it would make her cry. Let’s face it. No mom wants their kid in tears. So, we went in and met with my favorite nurse and got A.’s height and weight. She is now 11 pounds even and is 23.5 inches long. That’s great considering she was 7 pounds, 4 ounces at birth. I answered all of her milestone questions and was pleased to see she is pretty on target with everything. I did have one concern and that’s the baby eczema she seems to have. Bless God it is nowhere near where her sister’s was and she seems okay with it. The pediatrician came in and looked it over and gave us a cream to put on it. Since she knows how much interaction was had with my elder daughter, she trusts that I will use it as needed, but will also continue to use shea butter and coconut oil as well.

Our nurse re-entered with an oral vaccine, which A. took readily especially after getting some milk to wash it down. However, the others… (3 shots that combined inoculated against DTaP, Hib, Polio, Hep B, and Rotavirus) were administer via shot. A. was heartbroken and the look of hurt on her face that I’d allowed it to happen broke my heart. She even stopped and thought about it for a while and then got the saddest pout and cried some more as I comforted her. Poor baby. The good thing is she was over it pretty quickly and slept most of the evening away just getting herself together. That meant no Joy Night for her because we didn’t want her out and about if she was cranky. We’ll take pictures and post later.

So, that’s that. Have a great day and we will be posting again soon.

Friday Frazzle: I Love My Hair! A Book Review of a Melanin Inspired Birthday Gift 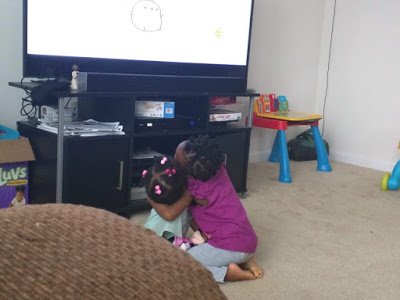 Friday Thoughts: She doesn’t have to hug you.