Last night, I walked with my husband and children into the doors of a high school that I’d been to plenty of times before–for concerts, for games.  This time, however, was VERY different.  This time, we were there for Bug’s High School Orientation.

It’s crazy when you think about it. I walked through the auditorium doors for the first part of his orientation and saw the banner welcoming the “Class of 20204”. Guys, it hadn’t hit me until that moment. That’s my kid. 2020 is here! My son is preparing for high school! God willing, he will graduate in four years!  Oh my goodness!! 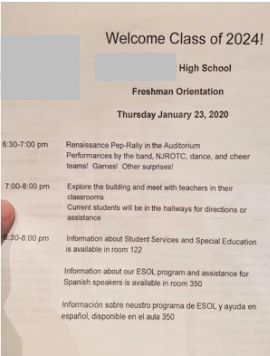 The evening opened with a “pep rally” where the Student Leaders had a “Scavenger Hunt”.  They would call an item out (i.e. five sticks of gum, tweezers, etc.) and whomever from the audience could run the item to the auditorium stage would win a point for their respectiveside (left, right, or center aisle).

You already know S. loves a good competition, so it wasn’t suprising at all for us to see him run to the front with an item.  After the hunt was over,  the cheerleaders and pep band came out for a bit of high school spirit.  A few final departing words and we were off to explore Bug’s soon-to-be-new world. 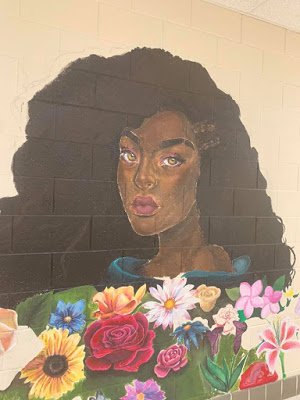 As we were walking through the building (which is a pretty large multi-level building), we were awed by some of the beautiful murals on the walls.  All of the art work had been done by students and represented different aspects of the student life.  This mural was on the way to the art section of the school.  It was beautiful.
The school layout is crazy too.  The halls are named after the classes and cores that lay in that area.  There was Wall Street, Commerce Street, etc. all for the business section of the school.  there were other relevant names for the art section, the communication section, the culinary section.  Yeah, let’s discuss.
Unlinke high school when I attended, where we just had core classes and a couple of electives, Bug has the opportunity to get hands on experience in several career fields tosee if he actually enjoys and has a passion for that area before spending tons of money and time for a degree or trade that he won’t use.  I love that.  Our first stop as a family was the Culinary Arts section.
No surprise there.  Bug loves cooking and trying to cook. His favorite Christmas gift was the cooking subscription for kids (that was surprisingly adept and robust).  He’s made some very yummy meals from that kit including apple turkey meatballs and a delicious pumpking pie with a maple graham crust. Oh my it was yummy!  So that was the first stop.
This place has a full size commercial grade kitchen that the kids work in and learn to do restaurant and Michelin-star level cooking!  The first few months of their classes they learn and are certified in ServSafe Food Safety Manager program.  This is a requirement of restaurants nationwide!  The school program also provides internship opportunites for their students that include areafine dining restaurants, catering businesses, wedding providers, etc.  The school has a history of hiring seniors as soon as they graduatebecause they alreadyhave the certifications and enough courses that they are about 6 months away from an Associates degree in Culinary studies. It was very impressive!  Bug asked a ton of questions and was genuinely excited…until he learned he can’t enter the program until his Sophomore year. It is a highly competitive, three-year program that requires an application to be selected by the director.  Apparently, it’s a very popular program, so they have to make sure students are serious about it because of the time and investment.  Freshmen year allows the leadership to see if the students possess maturity and passion for the program.  Bug was a bit disappointed that he would have to wait to start the core aspects of the course, but still was very excited to know when and where he needed to be to apply for access. 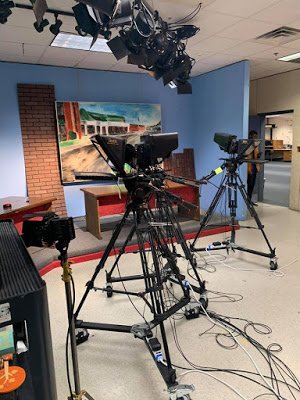 Our next stop was gently nudged by S.and I as we walked by the area.  Both of us have degrees in background in communication.  My degree focuses on Journalism and Mass Communication with a concentration in Public Relations. S.’s degree focuses on JOMC as well with a concentration in Television Production.  Plus, TV Production is his industry.  We walked to the area and I drew S.’s attention to the fact that the teacher was a fellow alum of his university.  The teacher and he kind of bonded quickly over that.
We walked in and found a fully created television studio.  There were sets for talk shows, news, and special events.  This core track also provides internship opportunties for all of their students.  It’s part of their practicum.  They have students right now who are recording Board meetings, graduations, basketball games, and other school events.  They are also introducing the High School news show to the student body soon.  Bug currently works with the AV Ministry at our church.  He also has a huge interest in drama, so learning about both sides of the camera was very appealing to him.  What was also appealing was this program is a full four years.  He can start as soon as he enters the school. 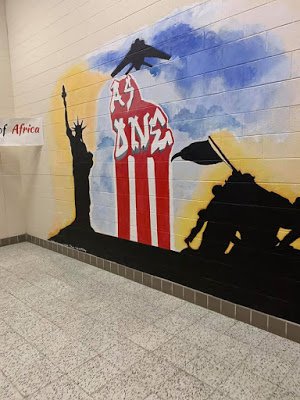 We left the TV production room after asking a TON of questions and were walking back to the main level when Bug asked if we could visit the Criminal Justice track.  I looked at S. and he at me.  It was nothing we’d ever discussed with him, but Bug’s birth father has a career in law enforcement so he definitely has some exposure.  We told him certainly as we were following him.

He and a friend made their way to the classroom and there we met the teacher.  He was very personable, very honest, and pleased that Bug was interested. He stated the kids used book work as well as personal experiences, class discussions, and current events.  Being that our state has had a recent transition in polictical power, his classroom discussions have been lively on some days.  However, he says the kids are always respectful and even when he and the students take dissenting views, they all come together in the end.  There was also the opportunity for him to decide if he wanted to focus on the law enforcement side or the political science as in lawyer, judge, or politician.  Bug left with quite a lot gleaned from that conversation.

Hope you all have an amazing week!