Hi everyone!  Hoping you had an amazing weekend.  Ours was pretty laid back (per usual with COVID), but we did manage to get a few things done and see some new things.

Let’s start with Friday!  Friday afternoon I was perusing my patient portal for my obstetrician’s office and discovered that my due date was listed incorrectly.  Not a big deal, but I wanted to make sure it was corrected because the hospital here can sometimes be snippy about such things.  I emailed my doctor and let her know of the discrepancy.  She emailed me back that evening and shared that I was correct.  The date the office had was based on my last menstrual period, but my first trimester ultrasound put me at the date I’d believed was my due date which was November 7th.  BUT, she informed me that she was pushing my due date back to November 5th and would explain why when she sees me at the next appointment.  I’m actually not surprised because at my 32nd week appointment I was already measuring two weeks ahead and at 5 pounds.  So we shall see what happens at my appointment. 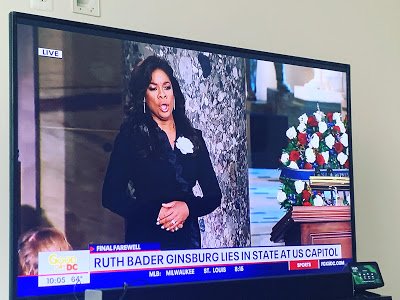 Since I was able to telework on Friday, my oldest son and I sat down and watched the ceremony for Ruth Bader Ginsburg.  I know a lot of people are talking politics right now, but I wasn’t watching for that.  I was watching because of the impact she had on the judicial and employment system.  The right to terminate a woman from a job for becoming pregnant was stopped in no small part by Ginsburg.  The ceiling breaking by her nomination and confirmation helped countless little girls see themselves in legal roles that had once been considered off limits to them.  I appreciate that she was honored. 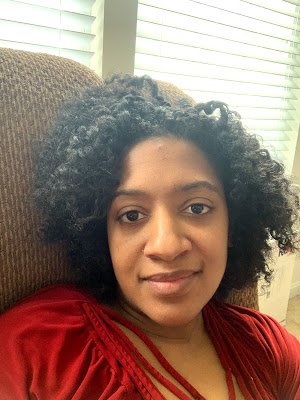 After all my telework tasks were complete, I took my hair out of its braided style and rocked the twist out (which I absolutely love).  The girls came into the family room with me and Honeybee helped little A. with her workbook.  I promise I love how loving their relationship is. 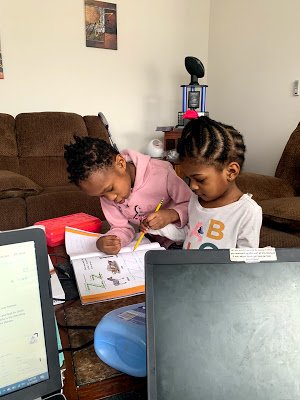 After a little while, it was approaching lunch time.  Our school district and state has done a wonderful job of providing for all children during the pandemic.  I’d been happily preparing breakfast and lunch for the kids when we received a notification that some of the foods were being tossed because no one was picking it up.  The schools can’t send it to shelters, so they were reminding parents that all students could receive the meals at no charge. 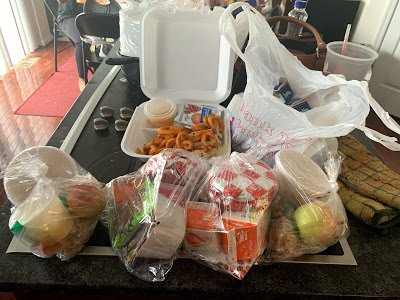 I hate seeing food wasted and I’m all about an assist while pregnant, so I went up to the school to get bags for the kids.  The school supplied so much.  There were meals for snacks, breakfast, and lunch.  It was truly a blessing because it was something else I didn’t have to worry about figuring out.  It also helps with the budget.  COVID is making things expensive and regardless of where you are financially, there are strains everywhere.  This was truly appreciated.
Friday night, the family gathered around and watched the playoffs and a couple of movies.  Baby J. tried all he could to hang out, but couldn’t.  It’s okay.  After we smiled at the video and pictures of him fighting sleep, we put him to bed and continued our evening. 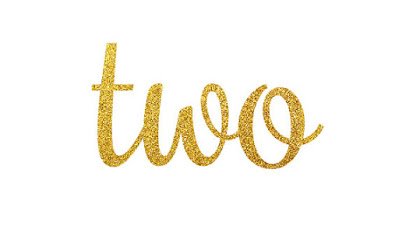 Saturday, we experienced a recent rarity.  We slept in.  There were no early appointments, no assignments that needed to be done, just an opportunity for everyone to rest.  I certainly needed it because I hadn’t been able to sleep well for a couple of nights.  The baby has been extremely active at night and likes to flip.  I love the motion, but it can be uncomfortable from time to time, so the opportunity to rest was so appreciated. 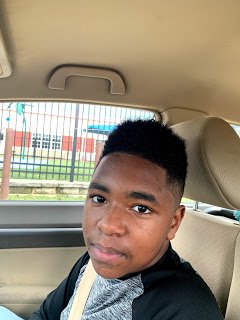 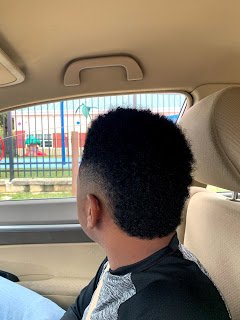 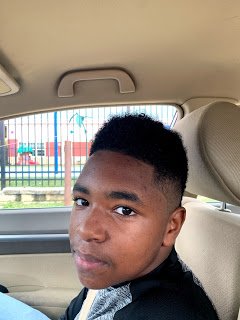 I received a notification on my phone that our son’s barber had appointments (he’s only taking customers by appointments now) available for Saturday afternoon if we were interested.  YES!  Our son hadn’t had a haircut since June!  He was in desperate need of a cut and I was more than ready for him to look “normal” again.  What I didn’t realize was how grown up he would look after his haircut!  I get it guys.  He’s 14.  But he was looking all cherub before the cut and now, he’s the spitting image of his father WITH A MOUSTACHE TRYING TO COME IN!  😧  When did that happen?  And just that quick I had a whole section of thoughts run through my head which I shall share with you all later.  Oh man! 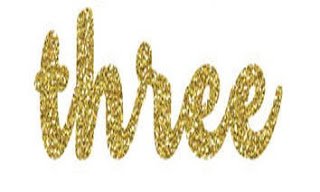 Sunday was a great day.  We woke up and watched our church’s live stream for our annual Homecoming service.  It was really special this year because a video of our former Pastor was shown.  He has been passed for several years but was a very powerful man of God.  It was great to hear his voice again and to know that the message he spoke was still relevant. 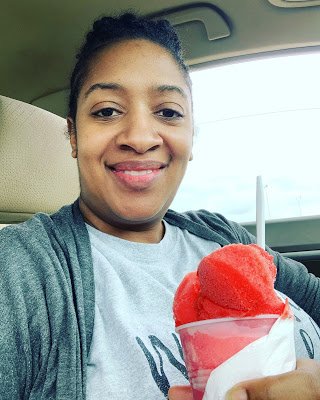 After church stream was over, I went to the grocery store to pick up a few groceries that I’d pre-ordered.  I usually park, don a mask, and then go in after I pick up groceries so that I can pick up produce.  The grocers don’t usually pick the good stuff.  So, that’s what I did.  Everyone and their mother was in the store yesterday.  The good thing is everyone had on masks and I only had to politely tell one woman to give me space as she was right up on my back.  Fortunately, she was very polite about it and understood I am hugely pregnant in a pandemic. 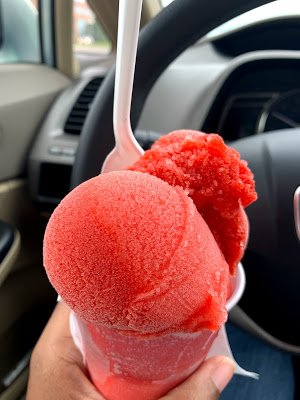 After I paid for the produce, I was driving home and noticed a farmer’s market that I’d never noticed before.  There were tons of tents and lots of choices in one area.  In another area, on the opposite side was a familiar truck with a familiar logo.  It was my favorite Icee truck!  They were socially distant and there was NO one in their line when I pulled up.  As they are a seasonal truck, this was their last weekend and I was very pleased to enjoy a sweet treat from them.  (I will SO miss them). 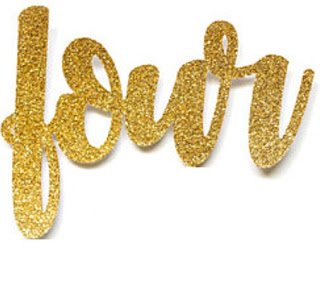 Sunday afternoon, I felt like an old fashioned Sunday dinner.  While S. and the kids went on a journey, I stayed home and made oven baked ribs, collard greens, baked macaroni and cheese, and two apple pies from scratch.  It was awesome just being able to have the energy and the knowledge of how to prepare. 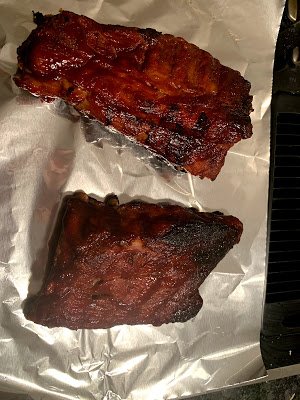 When the family got back they weren’t hungry, which was fine.  Leftovers always taste amazing the next day, and I didn’t have to cook on Monday.  Yesterday, the family dived in and loved everything.  The big hit was the apple pie.  I got the recipe base from here  .  I promise I love her recipes and though I tweaked just a bit, it was still phenomenal. 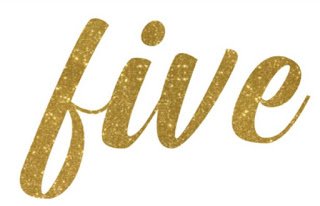 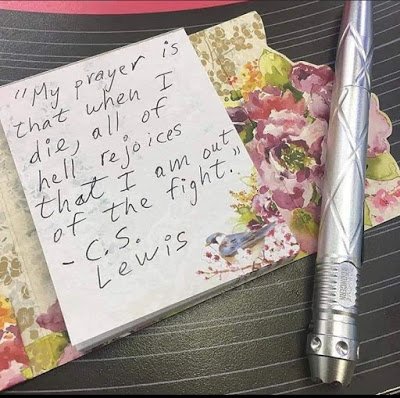 I saw this beautiful gem on an Instagram post from Proverbs 31 Ministries and had to repost it because of how it spoke to me.  I hope it speaks to you as well.
Well, that was our weekend in a nut shell.  Hope you had a great one as well.
-K 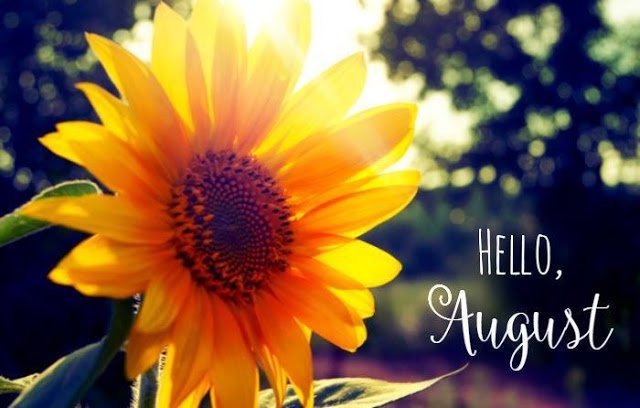